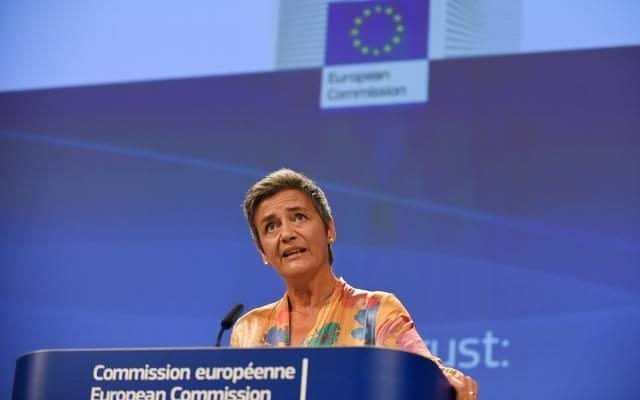 In a press conference on September 19th, EU Commissioner for Competition Margrethe Vestager announced a preliminary investigation into Amazon. At the heart of the potentially abusive conduct is Amazon’s ‘dual role’. One the one hand, Amazon offers a marketplace for third-party sellers to offer their products to consumers. On the other hand, Amazon offers its own products through its marketplace. The Commission’s allegation appears to be that Amazon uses the data it gathers on third-party transactions to boost the sales of its own products. In this blog post, I examine where the investigation is coming from, where it may be headed, and which related developments can influence it.

Where is the investigation coming from?

As to the origin of the investigation, Vestager noted that the conduct in question was first observed in the Commission’s E-Commerce Sector Inquiry. Indeed, in a staff working document accompanying last year’s final report on the inquiry, the Commission noted (para 651):

The Commission already concluded at the time that such behavior could potentially raise competition concerns.

However, there is an additional reason for investigating Amazon’s conduct. According to Vestager, ‘it’s also what a lot of people are talking about’. That is no overstatement. The last two years have seen a series of news articles raising concerns about Amazon’s dual role on its platform (see e.g. Bloomberg, Guardian x2, Wall Street Journal, New York Times and Buzzfeed). Those articles have two recurring themes.

Firstly, they use the example of a well-reviewed laptop stand sold on Amazon Marketplace by the company Rain. Amazon allegedly copied the laptop stand, and then started selling it at a lower price while also giving it more favourable placement in its product listing. Secondly—and more fundamentally—they cite Lina Khan, Director of Legal Policy at the Open Markets Institute.

Lina Khan has been shaking up antitrust circles since the publication of her article ‘Amazon’s Antitrust Paradox’ in Yale Law Journal last year. In a nearly 100-page article discussing (US) antitrust law’s failure to capture anti-competitive conduct by Amazon, she devotes four pages to Amazon’s exploitation of the data collected on its marketplace (pp. 780-783).

In those pages, Khan diagnoses the problem the Commission appears to be looking at. Amazon is vertically integrated in the sense that it offers not only the infrastructure for the commerce of third parties, but also offer its own products through this infrastructure. It uses the vast sales data it gathers on its platform to guide which product spaces to enter, and then pushes out competitors by undercutting them on price and/or giving its own items featured placement.

The question, however, is whether this diagnosis is correct, and if so, what the remedy is.

Where is the investigation headed?

Vestager stressed that the investigation is in its ‘very early days’. She acknowledges that Amazon’s use of data can be perfectly legitimate when used to improve its service to third-party sellers. However, she is concerned that Amazon uses also uses this data for its calculations as to ‘what is the new big thing, what is it that people want, what kind of offers do they like to receive, what makes them buy things’. To find out, the Commission has sent questionnaires to third-party sellers on Amazon Marketplace (available in German here).

This shapes up to be an abuse of dominance case under Article 102 TFEU, so the Commission will have to define Amazon’s market and establish its dominant position on it. As Amazon Marketplace operates a two-sided market, connecting consumers with sellers (the ‘sides’ of the market), market definition is not a straightforward exercise: do we define separate markets for each side, or one intermediation market? (See last week’s blog post on the issue.)

When looking at Amazon’s price parity clauses in 2013, the Bundeskartellamt chose the latter option, defining the market as that for ‘B2C online platform services for the sale of a general product range’, excluding auction platforms and price comparison engines. There are, however, no publicly available sources on Amazon’s share in this market.

If the Commission finds dominance, it will need a credible theory of harm, which is—again—no easy feat. It may draw inspiration from its Google Search decision, where it found that Google used its search engine to favour its own comparison shopping services over those of third parties. As Amazon is also said to use its platform to favour its products in the downstream market, its conduct is similar. The Commission’s argument then goes that excluding third parties reduces both innovation and consumer choice. Amazon will undoubtedly counter that its conduct lowers prices.

However, the Commission may want to look further back for precedent (especially as its Google Search decision is being challenged before the General Court). Exclusion of downstream competitors by vertically integrated undertakings—in particular telecom operators—was at the heart of the margin squeeze cases that ran throughout the 2000s. Yours truly has argued this assessment framework may also be applicable to exclusionary conduct of online platforms.

In any case, the Commission has some data to work with. Hagiu and Wright have empirically tested Amazon’s process of vertical integration, noting that ‘once Amazon reaches information parity with its sellers, it switches [from the marketplace] to the reseller mode in order to exploit its scale advantage.’ They find that Amazon particularly starts selling short-tail products. Zhu and Liu confirm that Amazon targets products with greater demand, and add that higher prices and lower shipping costs also guide the process.

Zhu and Liu have also empirically analyzed the effects of Amazon’s entry into third-party sellers’ product spaces. They find that ‘Amazon’s entry discourages affected third-party sellers from subsequently pursuing growth on the platform, [but] increases product demand and reduces shipping costs for consumers.’ Other research finds that Amazon’s algorithmic steering practices may lead consumers to pay more, although this is mostly limited to consumers who do not subscribe to Amazon’s Prime service.

While helpful, these results are far from conclusive. Given that Amazon’s conduct will be assessed as a ‘by effect’ rather than an ‘by object’ abuse, the Commission will have to demonstrate its anti-competitive consequences. Moreover, it will have to come up with an effective remedy. A behavioural separation between Amazon’s marketplace and retail activities is the most obvious solution. However, given the criticism on such remedy in the Google Search case, some might be more drawn to a structural separation.

The Commission’s probe targets one platform-to-business relation. However, the Commission has recently also adopted a proposal to regulate such relations generally. As explained in a previous blog post, the regulation would oblige platforms to be transparent regarding any differentiated treatment between the platform and its business users when it comes to access to data and rankings of search results.

Finally, the Commission does not appear to be the only authority concerned about Amazon’s practices. MLex reported that Amazon’s dual role has also caught the eye of German antitrust enforcers. Finally, Capitol Forum—a US news service focused on antitrust—has also investigated how Amazon favours its own products, and concluded that this conduct risks antitrust enforcement by the Trump administration.