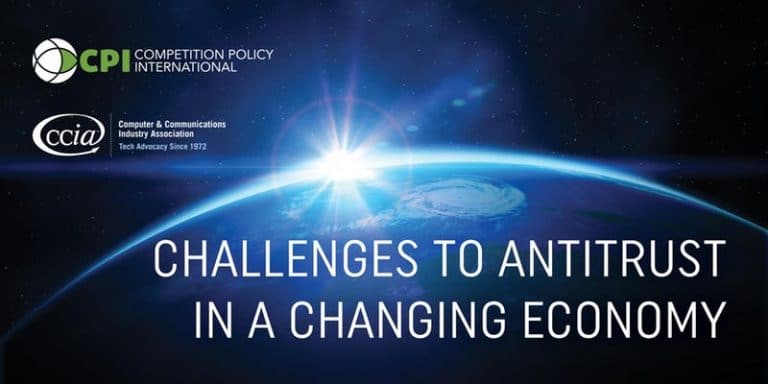 On November 9th, CPI and CCIA organized a conference on the topic of ‘Challenges to Antitrust in a Changing Economy’ at Harvard Law School. In the style of our previous conference recap on this blog, this post covers some of the salient issues discussed during the conference for those who could not make it (or want to relive it).

After opening remarks by Einer Elhauge, the first panel focused on some of the recent research suggesting an increase in concentration across various industries (see e.g. here and here). The panellists agreed that the concentration levels under examination were not representative: they examine industries rather than relevant markets for antitrust analysis, which are narrower. Moreover, these studies look at national concentration, while antitrust is more concerned with local markets (where concentration may have actually decreased). Whatever the value of these concentration measures, Henri Piffaut did remark that they were lower in Europe, crediting the EU.

Looking at individual firms, Lawrence White presented data suggesting that large companies are not becoming more important in the U.S. economy. Still, some industries might have known ‘a merger too far’. Bruce Kobayashi commented that the FTC was investing more in retrospective merger analyses to improve their predictions about the (pricing) effects of mergers. However, it was agreed that relatively crude concentration measurement tools such as HHI and market share remain important, firstly, as a screening tool, and secondly, to explain merger analysis to lay judges.

The second panel discussed recent attacks on the consumer welfare standard from the pro-enforcement side. What to make of the recent rise of progressive antitrust (and its many synonyms, including hipster antitrust, the Neo-Brandeis movement, and Woodstock antitrust)? The panel agreed that there are many present-day ails (e.g. regarding privacy, labour and political power) and that antitrust should not be responsible for curing all of them. Indeed, abandoning the consumer welfare (CW) standard as such was not under serious discussion.

However, some panellists did argue that the current interpretation/application of that standard should be adapted. In particular, there was a concern that the current rules have led to underenforcement of antitrust law, which may be particularly problematic in times of rising market power. The problem, Diana Moss suggested, is that the CW standard has been applied asymmetrically: anticompetitive effects are not easily accepted by courts, while procompetitive efficiencies are. One solution would be to introduce more presumptions regarding anticompetitive conduct (e.g. that 4-to-3 mergers are harmful). Harry First added that courts are too focused on price, while measures that are more difficult to quantify such as quality and innovation are too often disregarded.

The work on which Richard Schmalensee based his keynote is available here. He debunked ‘red herrings’, or common mistakes, that have been made in the analysis of multi-sided platforms. As an example of getting it right, he pointed towards the OECD report on rethinking antitrust tools for multi-sided platforms.

The speakers of the third panel focused on platform regulation. Andrei Hagiu explained that platforms often have incentives to govern the bad actors on their platform, given that the platform itself internalizes the negative externalities of their conduct. Consider a marketplace such as Alibaba: It has an incentive to ban scammers, because they will drive away consumers. However, it does not have an incentive to ban purveyors of products that people know are fake, since both seller and buyer are happy with those transactions. The harm in that case is to a third party, namely the original manufacturer. In those situations, where externalities spill over to third parties, a case can be made for regulation. Another example where regulation may be appropriate is fake news, since this drives rather than deters social network engagement, but negatively affects society.

A large part of the discussion centered around privacy. Eliana Garcés considered it unlikely that competition would solve privacy issues as (i) users are very inconsistent about their privacy preferences; and (ii) there is no clear link between market power and privacy violations (even small platforms commit them). In terms of a solution, she speculated that it would be more effective to regulate data usage rather than data collection. Andrei Hagiu, for his part, saw a potential solution is disclosure requirements. Nikhil Shanbhag cautioned, though, that data usage also promotes innovation.

Apart from a privacy issue, data can also be a source of market power. Michael Mandel rectified the idea that ‘data is the new oil’. For one, data is non-rivalrous: more than one firm can use the same data. And while data feedback loops are real (a platform improves its services based on user data, in turn attracting more users and therefore possessing even more data), the use of data for product improvement is widespread. Andrei Hagiu agreed, and argued that network effects are more likely than data to lead to monopoly.

In the end, the discussion turned to the leveraging of data to enter adjacent product spaces. The Commission is, for example, looking at Amazon’s use of third-party sales data to boost its own retail activities (see the CoRe blog post on this issue). The concern is that such conduct deters entrants. Andrei Hagiu replied that regulators should consider that Amazon has incentives here: it cannot discriminate against too many sellers, or the value of its platform to consumers would decrease.  He was more concerned about Amazon’s competition with players beyond the platform, as illustrated by Amazon’s battle with and eventual acquisition of Diapers.com.

The fourth panel asked whether monopoly power was rising, building on many of the issues that the first panel already touched upon. Rather than proceeding by panel discussion, however, the speakers gave short presentations. Hal Varian, for example, defended his interpretation of the increase in concentration: it is due to the productivity growth of super-star (tech) firms, rather than anti-competitive forces. James Bessen agreed that we should look to the productivity of top firms (thanks to innovation/IP) to explain rising industry concentration. He cautioned, however, that the fact that other firms are falling behind (e.g. in terms of slower productivity and wage growth) should be of concern to policymakers.

The last panel brought together an impressive collection of former agency officials from the Federal Trade Commission and the European Commission. Commenting on the potential divergence of competition policy between the EU and the US, Joaquín Almunia remarked that there is certainly no Commission bias vis-à-vis US companies (pointing, amongst others, to the fact that the strongest complainants in the Google case were US companies). Most of the panellists agreed that EU-US cooperation is in a very good place, as evidenced by the constant engagement between agencies. Still, while agencies are not politically motivated, there was a concern that the changing political climate could start influencing their work.

Finally, David Evans wrapped up the conference by remarking that it seemed like antitrust was getting boring a couple of years ago, but it is now once again an interesting, vibrant field. I do not know about the first part, but can only agree with the last part of his message.

Author’s note: The above reflects the author’s recollection of the conference. While it is based on extensive notes, misinterpretations of panellists’ contributions are always possible, and we are happy to correct them.