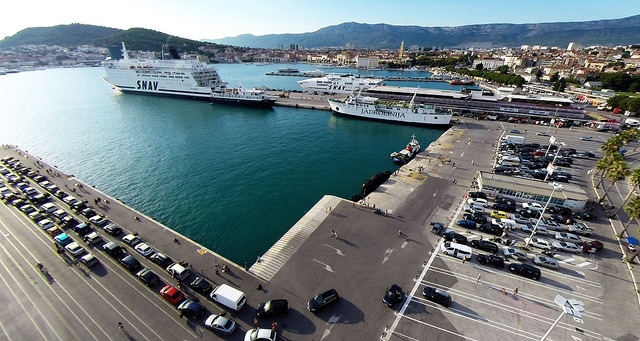 In August 2013, Trajektna Luka Split [TL] complained to the Commission that the Split Port Authority was providing unlawful State aid to the state-owned Croatian ferry operator Jadrolinija [JL]. The Port of Split is the largest Croatian passenger port and it is managed by the Split Port Authority. Port authorities are non-for-profit legal entities which manage, build and operate ports open to public traffic.

TL is a private company that operates the passenger terminal in the Port of Split. The port services it provides involve mostly mooring and unmooring of ships as well as embarkation and disembarkation of passengers and vehicles. Services by TL are subject to fees paid by the port users.

In 2003 the Split Port Authority granted to TL a 12-year concession. As concessionaire, TL was obliged to comply with the maximum ceilings on port fees fixed by the Port Authority. TL alleged that the maximum port fees were set at a level that was at least 40% lower than those applied in other ports of Croatia and that it was forced to carry out its activities below cost.

Moreover, TL alleged that 90% of domestic traffic in the Port of Split was operated by the state-owned ferry operator JL. Considering that the maximum port fees were significantly below those set in other Croatian ports, TL argued that JL received an economic advantage.

The Commission first explained that “(37) […] a concessionaire obtains exclusive rights for the economic exploitation of a part of a port and thus the right to provide port services to its users and to charge port fees for the provision of those services. The port fees charged constitute the revenue of the concessionaire.”

“(43) Furthermore, the Commission notes that the granting of exclusive rights should be distinguished from the prerogative of the Port of Split to set the maximum port fees for the provision of port services. Without prejudice to the legality of such port fees with internal market rules, the determination of those maximum port fees by the Split Port Authority should be regarded as regulation imposed by the State on providers of the port services operating in Croatian ports. […] This regulation has the legitimate aim of protecting port users from a certain degree of market power that Trajektna may enjoy as concessionaire in the Port of Split. The possible impact of such regulation on Trajektna’s revenues does not in itself mean that its revenues should be considered State resources.”

“(45) In the present case, the financial resources flow directly between the 100% privately owned Trajektna and its customers who would otherwise (without the maximum limit for the port fees) have been charged higher prices. Therefore, the financial resources flow directly from one private entity to another, without passing through a public or private body designated by the State to administer the transfer.”

“(46) In light of the above, the Commission concludes that the measure subject to the complaint does not involve the transfer of the State resources within the meaning of Article 107(1) TFEU.”

“(47) The above assessment is not affected by the fact that Trajektna enjoys de facto exclusive rights within the meaning of Article 106(1) TFEU. Undertakings to which Member States grant exclusive rights cannot be solely for this reason regarded as being under public control, and thus it cannot be assumed for that reason alone that their private resources become State resources. Moreover, there is no risk of circumvention of State aid rules by the mere existence of exclusive rights in favour of a private undertaking. In principle, market forces oblige private undertakings to conduct their economic activity in a sustainable manner; otherwise they can be forced to exit the market. In the present case, Trajektna, as any private operator, assesses the business risks and profitable opportunities that are available in the market and acts accordingly. The Croatian authorities would not be able to use the mere grant of exclusive rights as a tool to circumvent State aid rules by forcing a private concessionaire to charge port fees at a level not sustainable for private undertakings, because in that case no private undertaking (that does not itself receive State aid) would ever be willing to enter into such a concession contract next time it is tendered.”

Given that there was no transfer of state resources, the Commission considered it unnecessary to examine the other criteria of Article 107(1). It therefore concluded with a finding of no aid.

In this case the Commission examined the existence of State aid in the granting of an exclusive export licence. Imuna Pharm [IP] was alleged by a complainant to have received aid because it was given an exclusive right to collect and export human plasma from Slovakia. In establishing the existence or not of State aid, the Commission asked first whether the exclusive right entailed any transfer of state resources.

The Slovak authorities explained that the export license was not granted in exchange for any fee. The applicable legal framework in Slovakia is based on objective eligibility criteria which do not include the payment of any fee. Nor, is the licence auctioned to the highest bidder. Moreover, the licence is not tradable on any market. The Commission inevitably concluded that the state did not “directly” forego any state resources which it should otherwise receive when granting such a license. [Paragraphs 11-12]

The complainant also argued that IP should have paid a fee in line with the rules on services of general economic interest [SGEI]. The Commission rejected this argument for the simple reason that Slovakia did not categorise plasma collection and exportation as an SGEI.

Sale of human plasma below cost

The complainant in addition argued that because of its monopoly position IP could buy plasma from Slovakian hospitals at a price of EUR 16-19 which was significantly below cost, which was alleged to be EUR 30 per litre. Slovakia explained that the National Transfusion Service sold one third of its annual plasma production to hospitals in the country for hemotherapy at a price that was fixed by the Ministry of Health. The other two thirds of annual production were sold to IP as surplus production for further processing to make medicines from human blood. The price, agreed in a joint contract, was EUR 73 until March 2010 and rose to EUR 80 since April 2010. On the basis of this information, the Commission found that IP derived no undue advantage because it paid a price that was more than twice as high as the alleged cost of the plasma.

A couple of observations

This was the correct conclusion. After, the recent London taxi judgment [which was examined in a recent article on the StateAidHub] it is clear that Member States are under no obligation to auction exclusive rights or to charge a fee for their use. Since the export licence was granted for free and since it was not tradable, there was no forgone revenue for the state.

However, the finding of the Commission that there was no advantage is not robust. Certainly, the presence of a competitor could have driven the price of plasma even higher than EUR 80. There is plenty of case law that correctly says that the use of restrictive procedures that exclude competitors do affect prices and therefore such prices cannot be considered to correspond to normal market conditions. The fact that the price paid by IP more than covered the costs incurred by hospitals is irrelevant. Advantage is established in relation to prices that are determined by free market transactions. When markets operate freely, production costs represent price floors, not price ceilings. We cannot exclude the possibility that had more companies been given licences, plasma prices could have been higher.

In this case there was no State aid, but perhaps there was infringement of Article 106(1) in conjunction with Article 102. Together the two articles prohibit exclusive rights when they result in abuse of a dominant market position. In this case, the abuse could be the purchasing of plasma at excessively low prices.

[2] The text of the Commission decision can be accessed here: