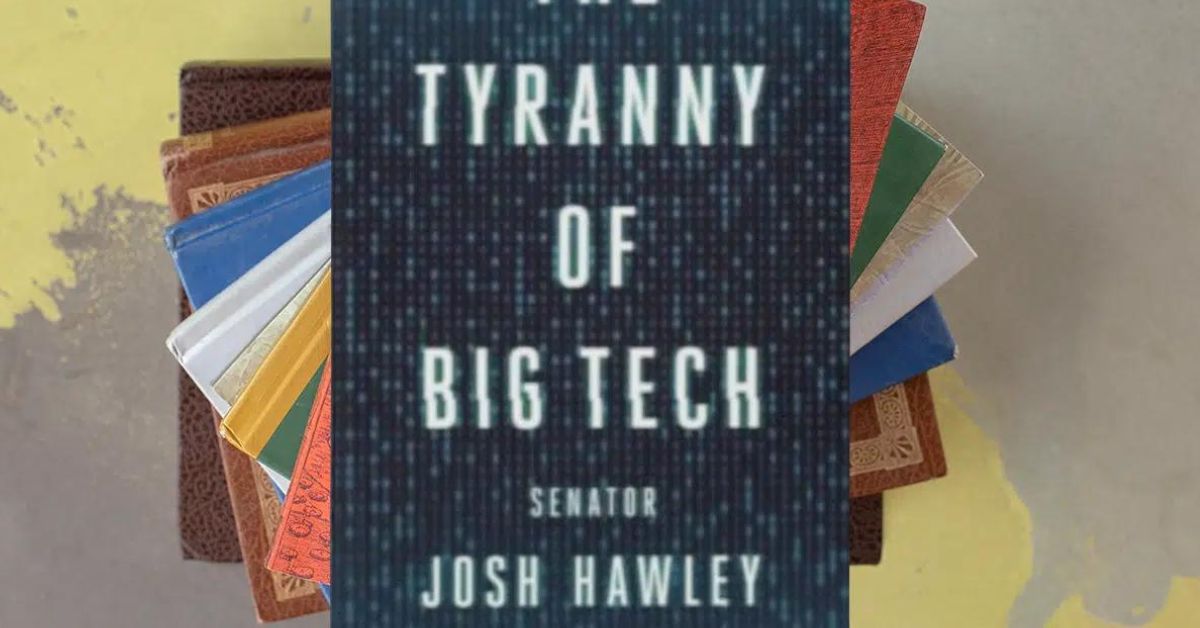 The United States is quickly catching up with the European Union when it comes to tech regulation. The latest example is the proposed Open App Markets Act. While the bill’s provisions deserve discussion, one feature stands out: that it is was introduced by senators from both major parties. While Democrats and Republicans are not known for agreeing on much, the crackdown on Big Tech is now clearly bipartisan.

However, while both parties might agree on the need for tech regulation, they don’t seem to agree on the rationale for it. Democrats appear concerned by monopoly power—in the tech sector and beyond. The book Antitrust by Amy Klobuchar (to be reviewed some other time) elaborates on those ideas. Republicans superficially share the concerns about monopoly, but other motivations hide under the surface. The Tyranny of Big Tech, a recent book by Josh Hawley, provides the perfect opportunity to explore those underlying motivations.

First though, the book’s publishing history is worth a paragraph. It was initially set to be published by Simon & Schuster, one of the ‘Big Five’ publishers (it was recently bought by Penguin, the largest publisher). However, S&S dropped Hawley after he tried to overturn the results of the presidential election. Hawley starts his book by lamenting how ‘Corporate America tried to cancel it, just as they have tried to cancel me’ (p. ix). Luckily, the conservative publisher Regnery ‘had the courage to stand up to the cancel mob’ (p. 159). His fury against ‘woke capitalists’ seems to inform much of the book.

The Tyranny of Big Tech is divided into three parts: it starts with antitrust history, then discusses the perceived evils of Big Tech, and finally discusses what policymakers can or should do. Along the way, Hawley—as most politician-authors—seizes every opportunity to cast himself as the hero of the narrative. On the second page already, he gets Mark Zuckerberg to admit that he has ‘a [political] bias problem at Facebook’, although—insofar as those words really have been spoken—Zuckerberg cleverly stayed silent on the exact direction of that bias (more on that later).

Apart from Hawley, the hero of the book is President Theodore Roosevelt. In Hawley’s telling, Roosevelt truly stood up to monopolies, mounting an effort to ‘convert the major corporations into public utilities’ (p. 36) and requiring ‘corporations to be licensed by the federal government’ (p. 50). The villain of the story President Woodrow Wilson, who only wanted to regulate the monopolists, amongst others through the Federal Trade Commission, a body of experts that he established.

It’s an interesting story, but it’s also strongly contradicted by Matt Stoller in Goliath (chapter 1). In contrast to Hawley, Stoller casts Roosevelt as ‘a powerful proponent of … monopoly’ who ‘generally did not want to break up monopolies’. Rather, it is Wilson who ‘pledged to break up monopolies’ while attacking Roosevelt for only wanting to regulate them through ‘a government of experts’.

To confuse the narrative even further, Hawley approvingly mentions Justice Louis Brandeis while discussing the idea that ‘economic arrangements have political consequences’ (pp. 24-25). Of course, it was Wilson who nominated Brandeis to the Supreme Court, and who reportedly shaped his political platform based on discussions about monopoly with him.

Perhaps facts matter less, or perhaps one can simply project any political idea on men that held office a century ago. What matters more for Hawley, in any case, is the values hidden behind these attitudes towards monopoly. Roosevelt, ‘the last republican’, understood liberty as self-rule—free from not only government but also monopolies. Wilson, on the other hand, introduced corporate liberalism, under which liberty was to be found in self-development—something that is perfectly compatible with monopoly.

This is where we see Hawley from his most populist side. At every turn, his project is aimed at empowering ‘the common man’, especially against the ‘elites’ (a group from which the Stanford and Yale educated Hawley would have trouble distinguishing himself). At times, Hawley’s focus on the ‘divisions between ownership, capital and labor’ (p. 16) connects with Marxism. He even approvingly references Trumbull’s idea of ‘keep[ing] property as equally divided among the inhabitants as possible’ (p. 24). I am not sure whether his legislative record reflects those purported convictions.

The second part of the book is dedicated to the dominant platforms. According to Hawley, ‘Big Tech represents today’s robber barons, who are draining prosperity and power away from the great middle of our society and creating, as they do, a new oligarchy.’ (p. 4) The tech firms are ‘corporate liberalism’s triumph’ (p. 60).

Hawley’s choice of platforms is interesting: he focuses on Facebook, Google, Twitter, Amazon and Apple (p. 3). He spends just slightly over a page to demonstrate their market power (pp. 7-8). However, the inclusion of Twitter and the omission of Microsoft show that his primary concern is not monopoly power. Rather, the choice of platforms strongly suggests that the main issue is speech-related.

Certainly, Hawley delves into various issues created or exacerbated by Big Tech: distracted and depressed youth, echo chambers, behavioural manipulation, surveillance, cozy relations with China, and so on. However, the real issue is censorship, to which Hawley dedicates all of chapter 7. And while the whole second part of the book contains exaggerations and misinformation, this chapter seems particularly misplaced.

The censorship chapter is basically one large charge against any form of content moderation (including fact checks) on the part of the platforms. Indeed, according to Hawley, ‘content moderation … means censorship’ (p. 89). To build his case, Hawley relies on the testimony of a Facebook whistleblower who contacted him, as well as several supporting anecdotes. In my view, however, Kate Klonick’s Harvard Law Review article does a better job at describing the internal content moderation processes of platforms.

And is there any truth to the claim that platforms are biased against conservatives? A roundup of the top-10 performing posts on Facebook is regularly made up of a majority of conservative personalities and outlets (Dan Bongino, Ben Shapiro, Diamond and Silk, Fox News, Breitbart, Newsmax etc.). Moreover, it just so happens that these outlets are major drivers of misinformation, which is why it would not be entirely surprising if they were the target of content moderation. And during a pandemic, the moderation of increasingly bizarre conspiracy theories becomes a matter of life and death.

Hawley is significantly briefer on the cure than on the disease. According to Hawley, the Federal Trade Commission (FTC) has ‘accomplish[ed] … well, nothing in particular’ (p. 133) and is thus in need of reform. He proposes placing the FTC under the direction of the Department of Justice and limiting its mandate (p. 152), although it is unclear to me how that would spur enforcement.

In addition, ‘the whole [antitrust] doctrine is ripe for a discovery of its populist, republican roots’ (p. 148). Congress should completely ban conglomerate mergers (p. 151). However, while conglomerate mergers are the preferred expansion method of tech firms, dedicating enforcement resources to thoroughly review horizontal mergers would probably benefit consumers more. Further, Congress should crack down on mergers involving digital platforms by simply prohibiting the dominant platforms from acquiring any firm. Also, ‘Google should be forced to give up YouTube as well as its control of the digital advertising market. Facebook should lose Instagram and WhatsApp’ (p. 150).

Other proposals go beyond antitrust. Venturing into content moderation again, Hawley proposes to end ‘the Section 230 immunity from suit for any tech corporation that engages in manipulative, behavioral advertising’ (p. 153). His ‘Do Not Track’ proposal would give every American the right to stop data collection with the click of a button (p. 154). And of course, Congress should ‘require that the tech companies apply the terms of service fairly, without political bias or discrimination’ (p. 156).

Hawley’s description of both cure and disease is uneven. There is clearly some concern for monopoly power in the tech sector, and perhaps even more broadly. In this sense, Hawley shares many of the ideas of the New Brandeis Movement, including that antitrust law is under-enforced (amongst others because of a misplaced focus on price effects) and that antitrust should constrain political as well economic power.

At the end of the day, however, the main problem—in Hawley’s eyes—is the perceived censorship of conservatives. His colleagues in the House share this view. Democrats wanting to constrain monopoly power should be wary of entering into alliances where the goal may be similar (i.e. constraining the market power of Tech Giants), but the motivations differ significantly. At the very least, they should be very careful that provisions that can be (mis)used for issues unrelated to market power do not find their way into a bill.

Insofar as this is a book review, finally, you may have guessed that I would not recommend the book. Beyond its content, discussed above, the prose provides no reason to pick it up either. For one, or one, Hawley is plagued by a tendency to repeat things three to four times. He writes, for example, that Roosevelt ‘loved publicity, craved it, thirsted after it, and lived for it’ (p. 27). At one moment, Hawley notes that ‘it was salubrious, it was progress, it was the future’ (p. 34); a little later, something is ‘out, yesterday, passé’ (p. 39).

Unless you are particularly curious to dive into the head of a Republican anti-Big Tech lawmaker, this review hopefully suffices to get an idea of Hawley’s The Tyranny of Big Tech, as well as its broader implications for tech regulation.