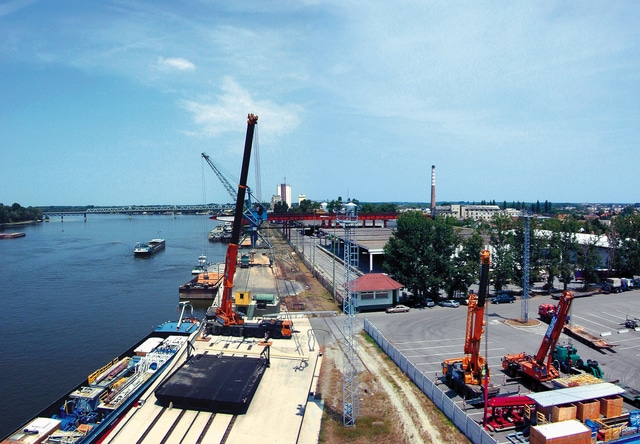 Last week’s article examined the use of a port facility. This week the focus is on a related issue: investment in port infrastructure and connections with the public road and rail networks. The investment took place at the Port of Baja in Hungary. What makes this case a bit unusual is that the aid that was granted was approved on the basis of Article 93 TFEU, rather than the more “normal” basis of Article 107(3)(c) TFEU. But Commission decision SA.39177 also contains other useful guidance and therefore deserves a more detailed review.[1]

The purpose of the project was to improve the dilapidated infrastructure of the Port of Baja in order to prevent users of the port from switching to another one. As explained in the Commission decision, “the works are in fact intended to make the infrastructure adequate for its use under the current rental agreements.” [paragraph 7] The project also aims to encourage a traffic shift from roads to inland waterways transport. Hence, in addition to improving the existing capacity of the port, the project aims to upgrade its intermodal use.

The port is a freight facility, located on land owned jointly by the Hungarian State, the municipality of Baja and ATI DEPO, a private logistics company. The port is included in the Trans-European networks [TEN-T traffic corridor VII]. It is also covered by the Hungarian Transport Operational programme.

The Port is currently managed by the Baja Public Port, a company established by the three joint owners. According to an agreement between the owners, when BPP realised profit, no dividend was paid out to its shareholders because all profits had to be re-invested in the development of the port.

The project was comprised of the following: construction of an access road and parking, and rail and waterside infrastructural development. All roads would be open to the general public, free of charge. The existing rail tracks were owned by the State. New tracks would not be publicly owned.

Operators of these facilities and infrastructure would be selected through a public, open and non-discriminatory tender.

The works were in fact intended to make the infrastructure adequate for its use under the prevailing rental agreements. The operator of the new berth for heavy goods would be selected through a public, open and non-discriminatory tender.

The costs of the project are shown in the table:

What is more interesting in this decision is the distinction made by the Commission between economic and non-economic infrastructures. In paragraphs 40 & 41, the Commission recalls what has been found in the case law not to constitute economic activity. This falls into two categories: the exercise of official authority and the provision of public infrastructure. “(40) Activities that normally fall under State responsibility in the exercise of its powers as a public authority are not of an economic nature and do not fall within the scope of the State aid rules. This may concern expenses for performing tasks of ensuring security, safety, police services, or anti-pollution surveillance in ports – insofar as they are not an intrinsic part of a project with a commercial end. The financing of such activities has to be limited to the costs to which they give rise and may not be used instead to fund other activities.” “(41) Moreover, public funding of general infrastructure that is not meant to be commercially exploited, such as public roads, bridges or canals, is in principle excluded from the application of the State aid rules, provided it is made available for public use without consideration.”

But then the Commission dealt with an issue that has often taxed public authorities. What happens when the State finances access roads or other links that facilitate access to infrastructure such as a port which is used for commercial purposes? In this connection the Commission noted that “(42) … the public roads will not be used for economic purposes and do not constitute dedicated infrastructure, since they will be open for free to all citizens and their access will not be restricted only to port users. The roads financed by the project will remain part of the public road network of Baja, whose maintenance is the responsibility of the Municipality of Baja. The provision of public roads for the general public by local authorities with the use of public funds is not an economic activity, but part of that authority’s public tasks. In fact, the road network will not be used economically as BPP will not demand fees for its use, nor will its use be restricted solely to BPP or the Port operators.”

Then it went to observe that “(43) the Court of Justice has further clarified that it is not sufficient for a project to be essential, linked, or a pre-condition for the economic activities performed by an undertaking in order to establish the economic nature of a given activity of infrastructure construction. The fact that the road development is linked to other parts of the project does not as such change the nature of the activity, which falls within the scope of public tasks.” A footnote quotes paragraph 47 of the judgment of the Court of Justice which confirmed the findings of the General Court in the Leipzig-Halle case. At any rate, what is very important is that the Commission infers from the judgment that just because a public authority connects different parts of a road or rail network to private premises does not make the connecting points economic in nature.

This is a reasonable inference. Otherwise we would arrive at the absurd conclusion that every company must finance with its own resources the connection of its premises to the public network.

The Commission found that in general there was State aid for the commercially exploited parts of the project. However, for certain parts there was affectation of trade and therefore there was no State aid. “(54) As regards the reconstruction of the existing rail tracks, the Commission notes that as long as rail tracks: (i) are part of the national railway network, (ii) are and will be managed by the national rail manager, which engages in no other economic activities besides the management of the national rail infrastructure, and (iii) will be open to all rail undertakings under non-discriminatory conditions, public support for the construction of this part of the rail infrastructure does not distort competition, nor affect intra-EU trade and thus does not constitute State aid within the meaning of Article 107(1) TFEU, given the absence of competition between infrastructure managers.” Here a footnote refers to Commission decision N 356/2002 concerning the UK Network Rail.

Advantage for operators and users

The Commission also concluded that the operators and users of the port would not receive State aid because they would be competitively selected or would pay market prices. “(55) … Therefore, for the operation of the new berth for heavy goods, as well as for the operation of the new Green Terminal, public, open, and non-discriminatory tenders will be organised. The award criteria will be transparent and non-discriminatory, and will ensure that the economically-most-advantageous offers shall be chosen.” “(56) As regards the new rail tracks and the equipment, the Hungarian authorities also confirmed that the future operator of all sections within the port that are not operated by MAV will be chosen on the basis of public, open and non-conditional tenders.” “(57) The Hungarian authorities have undertaken to ensure that the tender procedures used to select future operators of the port infrastructure to be built result in concession fees in line with market prices. In particular, the Hungarian authorities will cross-check the fees resulting from such tenders and conduct a comparative analysis with fees paid for similar concession contracts in similar Hungarian Danube ports.” “(58) Therefore, as any economic advantage at the level of future operators and lessees can be excluded, the future operators and lessees will not receive State aid within the meaning of Article 107(1) TFEU.”

It is obvious from the above quotations that for the Commission it is not enough to select operators through a competitive procedure. It is also necessary that the procedure results in prices comparable to those charged by other but similar ports. This approach creates two problems. First, why bother with a competitive selection if the results cannot be trusted to lead to market prices? Second, and most importantly, a competitive selection is the preferred option when it is not obvious what the market price can be. Competitive selection is a process of revealing the most efficient operator or the operator that can maximise proceeds from the management of the port. A price comparison would make sense if all operators were identical. Furthermore, prices charged by similar ports differ because their users and demand for their facilities differ too. Hence, price comparisons are not meaningful between even similar facilities which face different demands or which are in different competitive environments.

The comparison offered by Hungary and approved by the Commission is also questionable by the facts that are given in the decision itself. Hungary argued that the port had limited catchment area and did not overlap with other ports [paragraphs 25-27]. If competition is limited then comparison of prices is too tenuous.

Nonetheless, what would make sense would be a check of the rates of return or rates of profit. This is not the same as price comparison. A competitive procedure should result in the same rate of return per euro invested across all ports.

Compatibility of the Aid

The Commission examined the compatibility of the aid on the basis of Article 93 TFEU concerning coordination of public transport. Aid is compatible when i) it contributes to an objective of common interest, ii) it is necessary and proportionate, iii) the access to the infrastructure is open to all users on a non-discriminatory basis, and iv) the aid does not lead to undue distortions of competition.

With respect to the necessity, the incentive effect and proportionality of the aid, the Commission considered the existence of a funding gap, as indicated by the negative NPV of EUR 11,607,000 over a 30-year period, to prove that the project would not go ahead without aid. The expected net revenues in the project could not remunerate the investment costs of EUR 12,220,000. The calculation was credible in the eyes of the Commission because the Hungarian authorities took into account the highest possible fee levels. The Commission also took into account that without aid, fees would have to be raised by 410% to make the investment commercially viable. [paragraph 18]

What unfortunately is not revealed in the decision was the rate of return of BPP. It had to inject into the project EUR 612,000 of its own money. The funding gap was partly determined by the return demanded by BPP. The conclusion must be that Hungary, by covering 100% of the funding gap, may have indemnified to a large extent the investment of BPP from commercial risk and may have ensured a comfortable return for BPP shareholders.