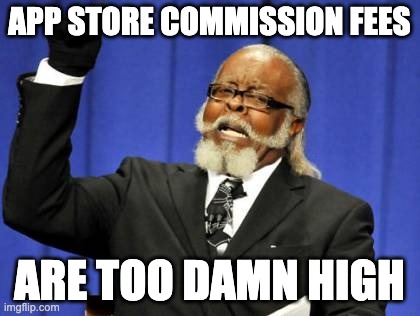 In a first blog post in this Epic v Apple series, we introduced the high-stakes dispute and the context necessary for understanding it. A second blog post discussed market power in app distribution and access to Apple and Google’s ecosystems under refusal to supply/foreclosure theories of harm. This third post zooms in on the most contentious feature of Apple’s App Store and Google’s Play Store: the 30% commission fee they charge on (in-)app purchases.

The intricacies of the App Store’s In-App Purchase system (IAP) were already set out earlier. The policy of Google Play Billing (GPB)—IAP’s counterpart in the Play Store—is similar. Until recently, however, Google did not enforce its billing policy as strictly as Apple, which meant that a lot of apps (including Netflix and Spotify) could use their own billing system rather than GPB, thus bypassing the 30% fee. However, on September 28, Google provided ‘clarity of billing policies’, stressing that all developers offering in-app purchases of digital goods (say, a video or music subscription) must use GPB.

The consequences of this move are not yet clear. Just like within the App Store, Netflix and Spotify may simply disable in-app billing. This move has the benefit of denying Google Play its cut, but also makes it impossible for consumers to subscribe within the app. Given that Netflix and Spotify qualify as so-called ‘reader’ apps, they have the ‘luxury’ of being able to disable IAP/GPB: user can still subscribe through their website and then log in on the app.

Other developers, such as Fortnite creator Epic, are not allowed to bypass the app stores’ billing systems in this way. In the past, Epic has therefore experimented with completely pulling its app from the Play Store and having users ‘side-load’ it instead (i.e. download it directly from the web). However, the Dutch competition authority, which examined this experiment in a report on app stores, came to sobering conclusions: Epic lost an estimated 41% of Fortnite downloads, seemingly losing users to competing game PUBG. Epic could not have even attempted such an experiment within Apple’s iOS, because side-loading is impossible within that ecosystem.

The 30% commission fee is thus here to stay—and is only becoming more unavoidable. On top of Google tightening its policies, Apple rejected an attempt by Facebook to simply inform users of App Store fees. Of course, these fees are at the heart of a number of antitrust cases, including not only Epic’s suit against Apple and Google, but also the investigations of the App Store by the European Commission (spurred by Spotify) and the Dutch competition authority.

Article 102(a) TFEU prohibits ‘imposing unfair … prices or other unfair trading conditions’. Could Apple’s 30% commission fees constitute such an unfair price? According to the ECJ, a price is unfair—or excessive—when ‘it has no reasonable relation to the economic value of the product supplied’ (see e.g. United Brands and AKKA/LAA). This formula has been operationalized through a two-pronged test: first, one has to determine whether the difference between the costs actually incurred and the price actually charged—i.e. the profit margin—is excessive; second, if the profit margin is excessive, it must be established whether the price is unfair in itself or in comparison to the prices of competitors.

The App Store’s profit margin is undoubtedly high: while the number is not public, some analysts put it at 90%. But is the 30% fee comparatively high? This depends, of course, on the chosen point of comparison. Play Store fees are also set at 30%, but this point of comparison is unhelpful given that Google also enjoys market power. And even app stores without market power model their fees on market leader Apple.

Perhaps pc game stores offer a more useful point of comparison. Here too the incumbent (Steam) charges a 30% fee for distribution. However, this fee is meaningfully being challenged by Epic, which set up its own store charging only a 12% fee. As explained earlier, Epic’s complaint seeks to achieve exactly this: the possibility to set up its own app store (with lower commission fees) within Apple’s ecosystem.

Finally, Geradin and Katsifis argue that Apple is not offering distribution services, but just payment processing and related services. One would then have to compare Apple’s 30% fee with those of PayPal, Stripe and like, which hover around 3% (often combined with a small fixed fee). While Apple’s price does look excessive from this perspective (it’s ten times higher), it must be acknowledged that the App Store’s distribution service exceeds simple payment processing.

However, this quantitative method may not be the right one. Apple has stated that ‘84% of apps obtained through the App Store share no revenue with Apple’ (these include, e.g., ‘free’ apps that are monetized through advertising). This means that a small minority of developers is subsidizing the great majority of developers: they overpay while others benefit freely from the App Store. Perhaps the unfairness of the fees is rather found in this imbalance, even though such an analysis does not fit naturally with the established excessive pricing test.

Instead of focusing on the level of fees, one could examine how they are sustained, namely through a form of tying (prohibited by Article 102(d) TFEU). There is no way to distribute apps within iOS other than through the App Store, which may be viewed as a tie between the operating system (tying product) and the app store (tied product). And there is no other way to pay for apps in the App Store than through IAP, which may be considered a tie between the app store (tying product) and payment processing (tied product).

In order for tying to be abusive, the products in question must be separate products, customers must be unable to get the tying product with the tied product (coercion), and there must be foreclosure in either the tying or the tied market (see e.g. Hilti and Microsoft).

To test whether separate products are being tied together, the EC generally examines whether there is distinct demand for the tied product. When it comes to app stores, this does seem to be the case: app developers have been complaining about the lack of alternatives to the App Store for years (and Epic seems ready to supply one), while consumers go as far as jailbreaking their iPhone to access other app stores. IAP also seems to be a distinct product: Apple only introduced this feature after the App Store, and payment providers already take care of billing of App Store transactions that are not obliged to use IAP.

When it comes to coercion, Apple prevents—both technically and contractually—that iOS users use any other app store than the App Store (of course, it’s impossible for alternative app stores to exist within iOS in the first place). And when selling digital goods, developers have no choice but to use IAP (unless they qualify as reader apps).

Insofar as there is foreclosure in this case, it is situated in the markets of the tied products, i.e. app stores and app payment processing. Entry into those markets is being restricted if not made impossible. All of this is significantly different in Google’s Android OS, which does allow for competing app stores (such as Amazon’s), although they have to be side-loaded.

Importantly, however, one has to consider whether this potential form of abuse can be justified. Apple prides itself on the user-friendliness and security of its ecosystem, which is attained—at least in part—by excluding other app stores from iOS. We must thus ask whether this restriction is proportionate to the benefits achieved by it. Is Android, which is policed less restrictively (e.g. by flagging, hiding and suspending app stores considered unsafe) so much less secure?

Processing (in-)app purchases exclusively through IAP can also reasonably be explained by a concern for free-riding: if every app developer could use alternative payment processors, Apple would be unable to fund its continuous investment in the App Store. At the very least, it would have to start actually competing with those other payment processors, which would certainly lead to a lower fee. Again, the question is whether this restriction is proportionate to its goal.

A consensus is building that the fees charged by app stores are too high. While app developers have long complained, they are now joined by prominent venture capitalists (e.g. Bill Gurley), tech commentators (e.g. Ben Thompson and Ben Evans) and other big tech companies (Microsoft and Facebook). The hardest part may be figuring out a suitable remedy.

An excessive pricing perspective calls for simply lowering App Store fees. By contrast, a tying perspective would result in the unbundling of the App Store and payment processing. In that case, however, Apple would be providing (even more) developers with free distribution. Would it then start charging a distribution fee separate from payment processing? Or would it derive its profit from a more competitive commission fee? (Of course, Apple also profits indirectly from the App Store and the apps in it, through the sale of iPhones.)

Some argue for a differentiated solution. After all, the digital goods sold by Fortnite (‘skins’) are produced at zero marginal cost—is a 30% fee then really problematic? By contrast, firms like Spotify have high marginal costs—for them, the 30% fee can mean the difference between profitability and losses. However, drawing a clear dividing line between these two categories of app is no easy feat.

Finally, as more often, the solution may not be a legal one, but rather a technological one. When Apple didn’t allow the cloud gaming services of Microsoft (xCloud) and Google (Stadia) in the App Store, Amazon launched its cloud gaming service as a web app. Microsoft plans to do the same. Relying on the web rather than a native app has drawbacks, but innovation in/competition from this sphere may prompt change.