You are here: Lexxion > Competition Blogs > Features > Disruptions vs refusals of supply: a guide to the case law 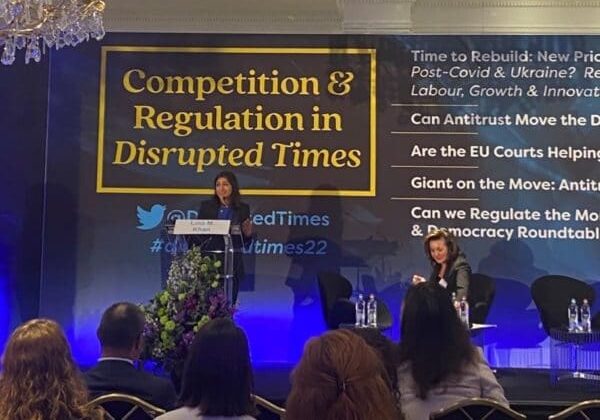 On 31 March 2022, FTC Chair Lina Khan was visiting her counterparts in Brussels. She also spoke at the CRA Conference, describing the need for new tools to tackle new problems: ‘[Practices] can still facilitate the maintenance of a monopoly—and therefore be illegal—but the precise mechanism may look different from some of the traditional concepts that antitrust enforcers look to.’ Khan zoomed in on one example:

[A]s the FTC noted in its antitrust lawsuit against Facebook, the imperative to scale quickly and build a large user base can lead a platform to encourage and lure third parties to interconnect with its network, only to later impose restrictive conditions or cut them off entirely. This type of ‘open first, closed later’ scheme does not quite fit a traditional ‘refusal to deal’ framework, and the tactic can be anticompetitive even if the platform did not have a duty to deal.

For example, in a network industry, a firm might obtain a dominant position based in part on certain ‘open’ policies that induce reliance by complementary firms, and then later exploit that position by offering less favorable interconnection terms or by refusing to interconnect with them altogether.

While ‘open early, closed late’ is still a new-ish term, the European Commission (EC) and courts have long treated such cases differently, distinguishing disruptions of supply from first-time (‘de novo’) refusals to supply. However, the case law has been rather muddled. In this blog post, I trace the origins of the disruption of supply case law. The underlying question is whether disruptions of supply are different enough from refusals to merit separate standards.

From Commercial Solvents to Bronner

The Commercial Solvents judgment (1974), which marked the start of the refusal to supply case law, concerned a disruption of supply. Commercial Solvents (CS) had been supplying Zoja with Aminobutanol—a raw material required to manufacture the medicine Ethambutol—for five years. After CS started manufacturing Ethambutol itself, it stopped supplying Zoja with Aminobutanol. Substituting Aminobutanol for another raw material would resource-intensive and in any case experimental. The European Court of Justice (ECJ) confirmed the EC decision finding the disruption of supply abusive:

[A]n undertaking which has a dominant position in the market in raw materials and which, with the object of reserving such raw material for manufacturing its own derivatives, refuses to supply a customer, which is itself a manufacturer of these derivatives, and therefore risks eliminating all competition on the part of this customer, is abusing its dominant position[.]

Thus, the judgment already implicitly examined the indispensability of the input and explicitly put forward the required anticompetitive effects (risk of eliminating all competition).

Télémarketing (1985) concerned a similar scenario. Centre Belge had been conducting telemarketing operations on the Belgian television station RTL (which held a legal monopoly) via Information Publicité—RTL’s exclusive agent for television advertising. After two years, Information Publicité notified advertisers it would no longer accept any telemarketing except its own. In its preliminary ruling, the ECJ cited Commercial Solvents in holding that:

[A]n abuse within the meaning of article [102] is committed where, without any objective necessity, an undertaking holding a dominant position on a particular market reserves to itself or to an undertaking belonging to the same group an ancillary activity which might be carried out by another undertaking as part of its activities on a neighbouring but separate market[.]

The ECJ explicitly referred to the indispensable nature of the input (telemarketing airtime) and the elimination of all competition, as well as the possibility of technical or commercial justifications.

In United Brands (1978)—adopted between Commercial Solvents and Télémarketing—the ECJ took a different approach. United Brands (UB) had stopped providing Chiquita bananas to Olesen—‘one of [its] most important long standing customers’ in Denmark. In a section dedicated to the ‘refusal to continue supplies’, the ECJ asserted positively that:

[A]n undertaking in a dominant position for the purpose of marketing a product … cannot stop supplying a long standing customer who abides by regular commercial practice, if the orders placed by that customer are in no way out of the ordinary.

The ECJ found such conduct inconsistent with Article 102(b) TFEU in that it limits markets to the prejudice of consumers and with Article 102(c) as it amounts to discrimination liable to eliminate a trading partner from the market. In this case, however, the firm halting supplies was not entering the downstream market. Rather, UB referred to the fact that Olesen had participated in an advertising campaign for competing Dole bananas. While the ECJ recognized a firm may protect its commercial interests, it considered UB’s action disproportionate.

When the ECJ crystallized its doctrine in the Magill (1995) and Bronner (1998), two cases of de novo refusal, it relied on Commercial Solvents and Télémarketing—not United Brands—for precedent. The ECJ established a clear refusal to supply test, requiring ‘exceptional circumstances’ and in particular (i) a refusal to supply an indispensable input (upstream); (ii) likely to eliminate all competition in an adjacent market (downstream); (iii) not justified by objective considerations (when the refusal concerns IP rights, the refusal must also prevent the appearance of a new product).

Until the 2000s, the distinction between disruptions and refusals to supply did not play a major role. It may have influenced case selection, with the EC prioritizing cases of disruption, but the number of cases is too small to draw firm conclusions. United Brands appeared, if not an aberration, at least a rarity.

In Microsoft I (2004), the EC assessed Microsoft’s refusal to provide interoperability information to Sun Microsystems and other developers of workgroup server operating systems. More specifically, the refusal constituted a disruption: disclosures that Microsoft undertook with respect to Windows NT had been discontinued with the development of Windows 2000.  The EC argued that the list of exceptional circumstances to be taken into account when assessing a refusal to supply should not be exhaustive. It pointed out how, in Commercial Solvents and Télémarketing, ‘the European Courts have given weight to circumstances where a refusal to supply constituted a disruption of previous levels of supply’. The EC also detailed the rationale between Microsoft’s diminished interoperability, namely an ‘open early, closed late’ strategy:

Nevertheless, the EC went on to prove that Microsoft’s conduct fulfilled the more stringent test for de novo refusals. On appeal, the EC clarified that it treated the disruption of supply ‘not as an abuse in itself but as one factor relevant to the assessment of Microsoft’s refusal to supply’. At the hearing, it elaborated that the disruption was one of three factors allowing Microsoft’s conduct to be characterized as abusive. However, the General Court (GC) too ended up applying the Bronner/Magill test. It has been suggested that the remedy, which required Microsoft to document and share a great deal of interoperability information, may have justified the higher standard.

In between its Microsoft decision and the appeal judgment, the EC took the opportunity to reflect on the standards guiding the application of Article 102 TFEU, which resulted in a Discussion Paper (2005). The paper is remarkable for its clear distinction between ‘termination of an existing supply relationship’ and ‘refusal to start supplying an input’, arguing the former should be subject to less stringent standards than the latter. The three main reasons to uphold stringent standards for de novo refusals do not apply (to the same extent) in case of disruptions. Firstly, duties to deal decrease the dominant firm’s incentives to invest into building essential facilities—if they are forced to share them, they may not get an adequate return on investment. This is different for disruptions of supply:

Secondly, duties to deal interfere with the dominant firm’s fundamental freedom of contract, but that freedom is not equally imperiled in cases where the dominant firm has already chosen to contract. Thirdly, it is challenging to design duty to deal remedies, but previous dealing facilitates the exercise by serving as a benchmark—the competition authority or court does not have to start from nothing when setting access conditions.

In the EC’s subsequent Guidance Paper (2009), however, little remained of the distinction. On the contrary, the EC held that the Bronner conditions apply to both disruptions of previous supply and de novo refusals. It did note that ‘the termination of an existing supply arrangement is more likely to be found to be abusive than a de novo refusal to supply’, especially in view of relation-specific investments made by co-contractors and the fact that previous supply indicates the dominant firm was receiving adequate compensation for its investment. Thus a light reversal of the burden of proof remains justified: the EC states that—in such cases of disruption—‘[i]t would therefore be up to the dominant company to demonstrate why circumstances have actually changed in such a way that the continuation of its existing supply relationship would put in danger its adequate compensation.’

The return of United Brands

Just before publication of the Guidance Paper, the ECJ got another opportunity to rule on disruptions of supply. In Sot. Lélos (2008), it was asked for guidance in proceedings brought by pharmaceutical wholesalers against GlaxoSmithKline’s Greek subsidiary (GSK). After years of fulfilling orders, GSK had halted supplies, which wholesalers distributed on the Greek market and in other Member States (sometimes in competition with GSK). Referencing Commercial Solvents and United Brands, the ECJ held:

The established case-law of the Court shows that the refusal by an undertaking occupying a dominant position on the market of a given product to meet the orders of an existing customer constitutes abuse of that dominant position under Article [102] where, without any objective justification, that conduct is liable to eliminate a trading party as a competitor[.]

It is important to ascertain whether the orders are not out of the ordinary, but if not, a lower standard of anticompetitiveness (liable to eliminate a trading party as competitor) applies. However, it must be noted that GSK’s disruption of supply was aimed impeding parallel trade by wholesalers. Given EU competition law’s unique market integration goal, parallel trade enjoys special protection, which may explain the lower standard applied in this case.

Disruptions of supply are a suitable qualification for the ‘open early, closed late’ scenarios often observed in the digital economy. The case law, however, allows for more than one reading. On the one hand, one could rely on United Brands and (to a lesser extent) Sot. Lélos to argue a less stringent standard applies to disruptions. On the other hand, one can write these two cases off as aberrations in an otherwise clear framework that requires indispensability/elimination of all competition for every refusal, be it of established supply or de novo. In the 2000s, even the EC stopped seriously differentiating the two, so any clarification may have to be led by the European courts. In fact, such clarification is starting to appear, first with Slovak Telekom and then Google Shopping (see Section III.C.3 of this paper of mine for a discussion). While the reasons for a differentiated treatment of disruptions vs refusals are sound, its foundations in the case law are still rather shaky.

This blog post first appeared on the Maastricht University Law Blog, in anticipation of #COMIPinDigiMarkts2022.