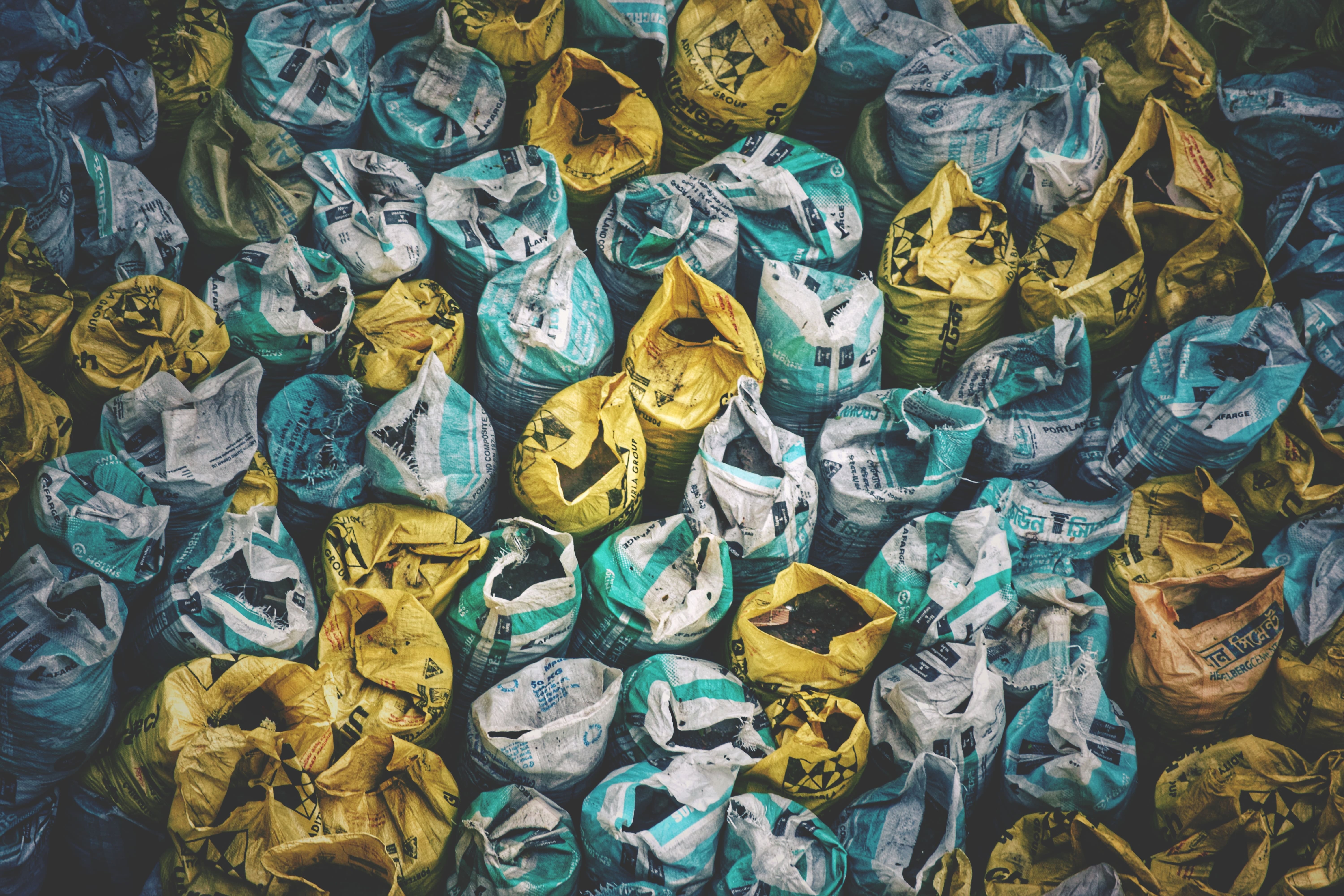 State aid to incentivise the use of waste to produce energy must be individually notified.

Waste management is an increasingly important aspect of policies aiming to prevent environmental degradation and slow down climate change. As the market for recycling expands and waste management becomes more profitable, there is also a higher risk of harm to competition by State aid.

Article 47 of the GBER block exempts State aid for waste recycling and re-utilisation. The waste must be generated by third-parties. Recycling of own waste may not benefit from aid under Article 47.

Another related activity that is not block exempted is “waste to energy”; i.e. the use of waste as a source of energy. Therefore, State aid for “waste to energy” has to be notified to the European Commission for prior authorisation.

Recently, the Commission, in decision SA.55100, approved a Polish scheme for the construction of a combined heat and power plant [CHP] in Gdansk, that would absorb about 160,000 tonnes of municipal waste and would reduce the use of fossil fuels for the production of energy.[1]

The beneficiary of the aid is Port Czystej Energii [PCE] which is a limited liability company owned by the City of Gdańsk. The PCE was established for the purpose of implementing the project and will become the owner of the plant. However, the construction and operation will be achieved through a public-private-partnership [PPP] between the PCE and a private contractor which will be selected according to EU public procurement rules. The contractor will be remunerated for the construction works, maintenance and operation of the plant.

Form and amount of aid

The aid will be in the form of a non-reimbursable grant from EU structural funds and a capital injection from the City of Gdansk. The remaining part of financing will be from market sources.

According to the Commission decision the “(22) eligible costs are calculated as the difference between the baseline scenario investment and the counterfactual scenario investment, the latter being the construction of a gas-fired boiler facility with an equivalent heat output to the proposed CHP plant. Estimates for the investment costs are derived from an independent study.”

The costs are itemised in the following table [copied from p.5 of the Commission decision]: 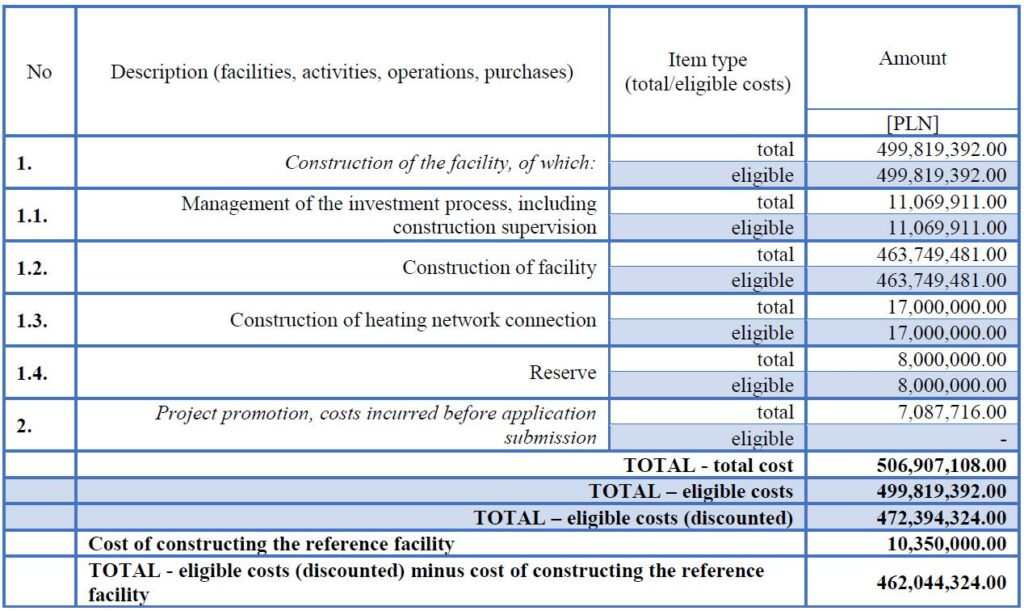 The Commission observes that “(26) the required rate of return for investments in cogeneration of thermal waste conversion installations can vary between 7 and over 10% in real terms after tax, depending on the specific risks connected with a given investment and the structure of the financing. Poland also referred to an earlier State aid case concerning the construction of a biomass and waste CHP plant in Vilnius, whereby it was indicated that the rate of return on investment should not be lower than 9%, while for most investors the acceptable level of return on equity should be 17.55-18,55%. In the case of the Gdańsk installation, however, Poland assumed a much lower required return due to the fact that the City of Gdańsk is primarily interested in maintaining the lowest possible cost of managing the residual fraction of waste, and not maximizing the return on its capital.”

Since the funding from the EU and the capital from the City of Gdansk were provided by public authorities which were not acting as private investors and that all the other criteria of Article 107(1) TFEU were satisfied, the Polish measure in favour of the PCE was State aid. [Paragraphs 32-36 of the decision]

The decision makes no mention of the private partner of the PCE. Presumably, the competitive selection procedure eliminates any advantage for it.

The aid clearly supports an objective of common interest. [Paragraphs 40-44]

There is a need for state intervention because according to the Commission “(46) undertakings do not have sufficient incentives to invest into expensive and complex projects such as waste-to-energy cogeneration installations and would, without public support, construct a heating plant fired with conventional fuels such as natural gas or hard coal. For this reason, public support is needed to attain environmental objectives. Moreover, PCE would not be in a position to cover investment and operational costs of the project merely through revenues from the sale of heat and electricity, and the fees paid by the citizens to treat municipal waste. To that end, Poland demonstrated that without support the project would not be profitable.” This is correct, although it seems to be more of an explanation of the incentive effect of aid.

Indeed, with respect to the incentive effect of the aid, the Commission confirmed that the project did not start before the aid application, and that the PCE signed a contract with the contractor which was conditional on the approval of State aid by the Commission. [Paragraph 52] Conditional contracts are in line with recent case law on incentive effect. See the judgment of the Court of Justice in case C‑349/17, Eesti Pagar v Ettevõtluse Arendamise Sihtasutus. This judgment was reviewed on the blog on 26 March 2019.[2]

With respect to the incentive effect being manifest in a change in the behaviour of the beneficiary, the Commission noted that “(53) for the conclusion of financial profitability of an investment, two main financial performance indicators are calculated: i) the NPV of investments and ii) the IRR on investments. In the case when the project does not get financial support in the form of a direct grant, the Gdańsk CHP generates a negative NPV of PLN -203 million and an IRR of -0.32%. The Commission considers that the calculations submitted by the Polish authorities are consistent with market practices and accepts arguments that, given the levels of NPV and IRR, the investment at hand is not economically viable and without the aid the municipality would not carry out the project.”

“(54) In addition, even with the aid, the Gdańsk CHP generates a negative NPV of -3.6 million and a low IRR of 1.43%. According to the Polish authorities, the project developers are ready to accept such low profitability because the aim of the project is not to maximise the returns but to maintain the lowest possible cost of managing the residual fraction of waste without excessive increase in the waste collections fees for the citizens.”

There is no mention of the return expected by the private partner, how this very low profitability may impact on its operations and whether the low profitability for the City of Gdansk is the result of too high operating profit for the contractor.

The aid is found to be proportional. “(57) Poland submitted documents calculating eligible costs (those needed to achieve energy efficiency and environmental protection measures) based on the counterfactual scenario of a construction of a gas-fired boiler facility with an equivalent heat output (cf. recital (24) above). Against this counterfactual, the aid intensity will comply with the 60% threshold set out in EEAG for a CHP project in a NUTS level 2 region (cf. recital (28) above).”

The Environmental and Energy Aid Guidelines define an aid ceiling of 45% for district heating, which can be raised by 15 percentage points for Article 107(3)(a) regions.

Then the Commission repeats that “(58) as for the profitability, the Commission notes that the NPV of the project achieved with the aid is negative (- PLN 3.2 million) and the IRR of the project is low (1.43%) compared to normal market rates. The reason is that the City of Gdańsk accepts to undertake this investment in the light of the mission of managing the residual fraction of waste. It follows that the beneficiary is not likely to obtain excessive profits from the construction and operation of the aided project.”

The Commission notes that “(61) paragraph 90 EEAG explains that the Commission considers that aid for environmental purposes will by its very nature tend to favour environmentally friendly products and technologies at the expense of other, more polluting ones. Moreover, the effect of the aid will in principle not be viewed as an undue distortion of competition since it is inherently linked to its very objective.”

The Commission found that the aid caused no excessive distortion of competition and therefore approved the aid.