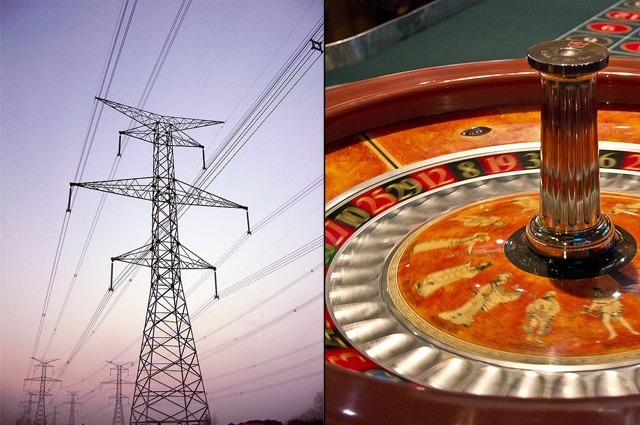 Security of energy supply can be a service of general economic interest. Avoiding harm to the environment is not one of the principles that underpin the internal market and which may not be violated by State aid measures. Determining whether competition is distorted does not require definition of the relevant markets.
This article examines two apparently different but in a sense symmetrical judgments of the General Court: one on energy supply obligations, and another on the granting of exclusive rights. While in the first case, the issue is how much the state may compensate undertakings with costly public services obligations, in the second case, the issue is exactly the opposite: how much the state should charge in order to prevent undertakings with exclusive rights from benefitting too much.
i) Energy security and public service obligationsOn 3 December 2014, the General Court ruled on case T-57/11, Castelnou Energia v Commission.[1] Castelnou Energia [CE] appealed against Commission decision N 178/2010 concerning public service compensation granted by Spain to generators of electricity produced from domestic coal. CE was a producer of electricity from combined cycle plants using natural gas.

In order to ensure its energy security, Spain established a system composed of three instruments. First, it imposed an obligation on certain plants to use domestic coal. Second, power plants using more expensive domestic coal received a compensation. Third, these plants were given priority access to the wholesale electricity market, i.e. they were preferred over other suppliers of electricity. The Commission had found that this system contained State aid both directly to certain electricity generators and indirectly to domestic coal mines, but authorised it for being compatible with the internal market.

Apart from procedural issues on standing as a competitor of the beneficiary electricity generators, CE raised several pleas. First, it disputed that the obligation to buy domestic coal could be characterised as a public service obligation.

The Commission, in its assessment, considered that Spain was justified to seek security of energy supply by becoming less dependent on imported sources of energy. Since domestic coal was more expensive than foreign coal, it became necessary to force energy producers to use domestic coal. That is why an obligation to buy domestic coal was imposed. Naturally, the obligation created extra costs that had to be compensated.

With respect to whether Spain could define the obligation to buy domestic coal as a service of general economic interest [SGEI] in the meaning of Article 106(2) TFEU, the General Court agreed with the finding of the Commission that security of supply could be an SGEI [paragraphs 101 – 108]. Spain argued that foreign sources of energy products were uncertain and subject to disruption, therefore it had to rely more on its own sources.

There is no in-depth analysis either in the Commission decision or in the judgment on the risk of disruption of foreign energy sources. The Court seemed to accept at face value Spanish allegations that imports posed higher risk. However, if the policy objective is to reduce threats to the supply of energy products, two observations are in order here. First, relying on one energy source, even if it is domestic, can also be risky. Second, not all foreign sources of energy products are vulnerable to disruption. For example, Australia exports large quantities of coal. It is unlikely that Australia will somehow become hostile towards Spain. The best way to increase security of supply is to reduce dependence on any single source which means as wide diversification as possible of sources of supply.

Environmental harm and the internal market

Another important plea of CE was that an increase in the output of domestic coal and the usage of more coal in generating electricity would harm the environment because CO2 emissions would rise. That would be contrary to the EU aim of reducing CO2 emissions. Here too the General Court accepted the views of the Commission that an increase in coal output and related emissions would not necessarily lead to more emissions overall because the cap that applied to Spain would still hold [paragraphs 113 & 217]. If the emissions of one industry increased, it would have to buy allowances from another industry so as to be able to pollute more. This balancing of emissions would not result in a breaching of the general emissions cap that applied to Spain. This reasoning is, of course, correct and reflects the inherent flexibility of the existing system of overall cap with tradable allowances.

More surprising, however, was the response of the General Court to CE’s argument that the aid to electricity generators that used coal could not be declared compatible with the internal market because it violated the principle of “polluter pays”.

The Court recalled that the Commission may not use its power of assessing State aid to determine whether a Member State measure infringes other provisions of EU law. The latter is reserved only for EU courts. Nonetheless, the Court clarified that the Commission must verify that an aid measure is not inseparably linked to a requirement that violates internal market rules [paragraphs 179 – 193]. This is because State aid may not cause in any other way a distortion in the internal market [apart from the inherent distortion caused by the aid]. Examples of distortions which are incompatible with the concept of internal market are those that affect the free movement of goods, free establishment, free competition, as well as internal taxes. [Paragraph 186]

This is a seminal judgment. Apart from my quibble concerning security of supply, the clarification that harm to the environment does not undermine the integrity of the internal market may not be welcomed by all, but it still elucidates how State aid relates to the concept of internal market. This judgment also makes more explicit how far the powers of the Commission may extend when it assesses the compatibility of a State aid measure and what non-State aid issues it may take into account in that assessment.

The General Court in its judgment in case, T-58/13, Loutraki and others v Commission agreed with the Commission’s methodology.[2] The main plea of the appeal against the Commission was that the two categories of exclusive rights concerned two distinct markets and should not have been considered together.

The Court accepted that the various state interventions could be subsumed together in a single measure. Furthermore, the Court explained that in the field of State aid it is not necessary to define precisely the relevant market in order to determine the existence of an advantage [paragraph 88]. The Commission is not required to carry out an economic analysis of the actual situation on the relevant markets.

More importantly, the Court agreed with the Commission that the two categories of exclusive rights could be examined together in order to establish whether OPAP derived an abnormal advantage. [Paragraph 93]

However, the Court also makes a curious statement whose significance is not subsequently taken into account in the judgment. In paragraph 92 of the judgment, the General Court acknowledges that the purpose of the exclusive rights was to “increase OPAP’s market value to make it more attractive to potential buyers”.

The question that unavoidably arises from this statement is how OPAP could be made more attractive as a company without the state conferring an advantage to it, which was not available under normal market conditions [which is the standard for a finding of advantage in the meaning of Article 107(1) TFEU]? If OPAP was forced to pay a fee that would not allow its return to exceed its cost of capital, why and how could it entice prospective investors? It is contradictory to claim that the return of investing in a company is equal to the cost of capital and at the same time that the company is more attractive to investors.

In its decision on the two categories of exclusive rights, the Commission examined the expected rate of return of OPAP and concluded that it was relatively high. However, it accepted it because the risk of investing in Greece in the present economic situation is considerably higher than in other Eurozone countries. This means that the cost to investors and therefore the cost of capital of OPAP is higher because of higher risk. In the end, OPAP’s return must be as high as the cost of capital but not higher. It cannot be made more attractive to potential investors without allowing OPAP to make excess profits. Could the Court mean that OPAP had to be made more attractive in order to compensate for the extra risk? Unless the Greek casinos appeal this judgment to the Court of Justice, we will never know the answers to these questions.