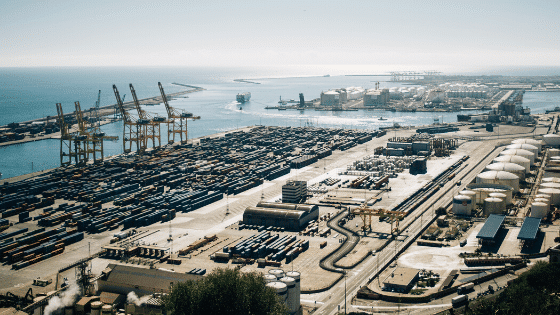 Several postings in this blog have examined cases concerning funding of port, airport or sport infrastructure. These cases have all had interesting peculiarities. Some involved no state aid because public authorities acted as private investors, while in other cases the funding arrangements were designed in such a way so that the state aid to operators would not spill over to users of the infrastructure.

This posting examines yet another Commission decision on public funding of infrastructure. There are two notable issues in this case. First, while the funding of the operator does constitute state aid, the construction of certain parts of the port facilities falls outside the scope of Article 107(1) TFEU because they are linked to the official functions of the state. Second, the proportion of public funding is very high, yet financial calculations purport to show that the aid is proportional. I will explain that these calculations demonstrate only the necessity of the aid for the project as a whole but not the proportionality of the aid.

Greek authorities intend to grant EUR 11.2 million to an infrastructure project at the port of Katakolo in western Peloponnese. The usage and exploitation of the port has been assigned to the “Pyrgos Municipal Port Fund” (PMPF) which is a public law legal entity. The objective of the project is to improve and expand the existing port facilities (piers and buildings) and upgrade safety features. The project includes the construction of a new building for port traffic and passport control. The cost of this building is not included in the notification, because the Greek authorities claim that it is not related to the economic activities of the port.

The total notified investment cost (without the new building for port traffic and passport control) is EUR 12.3 million. The cost is covered by the following contributions: EUR 1.7 million by the Greek state, EUR 9.5 million by the ERDF (which corresponds to a rate of co-financing of 85% and brings the total amount of public money to EUR 11.2 million) and EUR 1.1 million by the beneficiary (i.e. the PMPF). The resulting aid intensity is 91.23%.

The public financing will take the form of direct grants to PMPF, which will be given gradually as the upgrading works progress. The works will be contracted out on the basis of a public, open and non-discriminatory tender procedure, in compliance with EU public procurement law.

According to financial and economic cost-benefit analysis carried out by the Greek authorities, over a reference period of 25 years, the project has a negative financial net present value (i.e. funding gap) of – EUR 10.2 million. The funding gap ratio, calculated as the ratio between the net present value of the project and the discounted total cost of the project, which is EUR 11.1, is 91.23%. This indicates that the investment project is not financially sustainable and would not be concluded without significant public support.

The Commission accepted the view of the Greek authorities that the new building for port traffic and passport control would be linked to the exercise of public authority and would not be of an economic nature. Consequently, its public funding would not constitute state aid. Examples of public tasks (i.e. tasks that fall within the remit of the state) are security, safety, police services, or environmental protection functions, “insofar as they are not an intrinsic part of a project with a commercial end” and provided that the funding of such tasks is limited to what is necessary without any spillover to commercial activities.

With regard to the end users of the new infrastructure, cruise operators, the Commission concluded that they would not obtain an undue advantage. They would have equal and non-discriminatory access to the new infrastructure. The docking fees charged by PMPF are similar to the fees charged by other comparable ports in the EU and allow PMPF to cover its operating costs. This is an indication that “the docking fees charged by PMPF do not provide an undue advantage to the users of port of Katakolo.”

The Commission assessed the compatibility of the aid directly on Article 107(3)(c) TFEU and, as is its normal practice, it carried out a detailed economic appraisal according to the methodology of the “balancing test”.

It was not difficult for the Greek authorities to demonstrate that the project served an objective of common interest (it strengthened cohesion) and that the aid was an appropriate instrument, as the construction of the port infrastructure could not be achieved through other means.

As regards the necessity of the aid, the cost-benefit analysis had proven that the project would have a negative net present value. This showed that it would not be undertaken by a private investor. The Commission acknowledged that the aid had an incentive effect and observed that it “has consistently accepted that port infrastructure projects require considerable capital investments that can only be recovered in the very long term, and their economic viability may not normally be ensured without public funding.” [paragraph 68] (in this connection, see the Commission decisions cited above)

Although the amount of aid in this case is exceptionally large (aid intensity of 91.23%), the Commission nonetheless concluded that it was proportional. The Commission added that in the case of the port of Klaipeda, the aid intensity was 65%, while in the case of the Augusta port, the aid intensity was 69%. It went on to explain that “the aid intensities of different infrastructure projects at different ports are not directly comparable. The necessity for public funding for each project is a function of certain variables, such as the kind of activities to be carried out with the infrastructure, volumes of traffic, expected revenues, costs for constructing the infrastructure, etc., which are specific to the features of each specific infrastructure project.” [paragraph 72]

The decisive element in the assessment of the proportionality of the aid was that the “the public funding provided for this project is in line with the funding gap ratio identified for the project, namely of 91.23%. Therefore the aid is limited to what is necessary in order to make the project feasible.” [paragraph 74] In other words, the aid merely served to make the project break even. The must have thought that the PMPF did not derive an undue advantage, apart, of course, from the fact that it could carry out a project that would not be possible without state intervention.

On the basis of the above considerations and because the aid would not cause any excessive distortion to competition between ports, the Commission declared the aid to be compatible with the internal market.

The confusion between the necessity and proportionality of the aid

The reasoning of the Greek authorities and that of the Commission appears to be solid. It is not. A simple example can reveal the fault in their reasoning. Of course, I hasten to add that without having access to the raw data used in the cost-benefit calculation any criticism of this decision has to be circumspect. My purpose, however, is not to take exception with the precise numbers but to explain why these calculations alone cannot prove the proportionality of the aid.

It is absolutely clear that a project with a deficit or financial gap of 80% would never go ahead. This proves the necessity of the aid. But it does not prove that the aid is proportional. In the example above, I started from the position that the aid is 80% of the initial investment cost. But note that the 5% return on the overall project, which appears to be very reasonable, in fact corresponds to a return of 25% [25/20 = 1.25%] to the owner/operator of the project who in this case is PMPF. To bring the return or profit for PMPF down to a level that is normal for port operators, its contribution would have to be raised to 23.80 [25/23.80 = 1.05%]. The aid will then have to be lowered to 76.20 instead of 80, with the aid intensity dropping to 76.2% instead of 80%. But the funding gap of the project as a whole is still 80%.

This example demonstrates that the overall profitability of a project is a distinctly different issue from the question of whether the contribution of the aid recipient is sufficient and whether the aid is proportional.